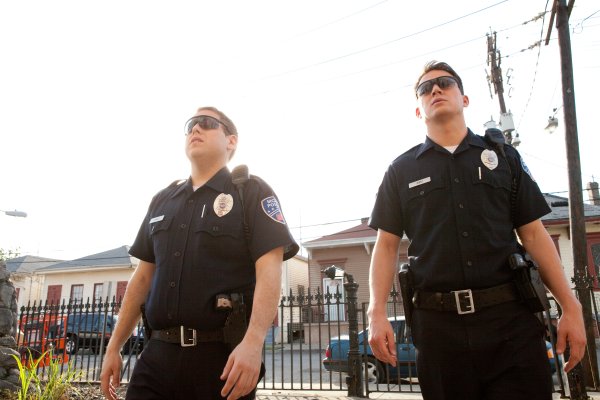 Based on a TV show that never made its way to British shores, 21 Jump Street is an unknown quantity. Whatever uniqueness or novelty 21 Jump Street had in its premise of cops working undercover in high schools disappears under a wave of familiar 80’s action tropes and a predictable script. If you’re looking for a good two hours at the cinema then 21 Jump Street fits the bill, but beyond the jokes there’s little here that’s fresh despite the film’s attempts to subvert expectations.

Tatum’s Jenko and Hill’s Schmidt first meet in high school where Jenko is a dim, popular jock who teases Eminem-but-fatter-looking Schmidt. When they reunite at the police academy they put their differences aside and become best friends. Believing their life as cops will be full of car chases and shoot-outs, they’re stationed to park duty and given bicycles instead of patrol cars. When a drug-related bust goes wrong they get their asses sent to 21 Jump Street, a program that recruits officers to solve crimes in schools. Their first case is to bust a drug ring that’s supplying synthetic drugs to teenagers.

The biggest problem with 21 Jump Street is its story. The performances, humour and action within are decent but the script structure is formulaic. Arguably that’s the point as 21 Jump Street looks to scrutinise the action-buddy comedy, though it all happens in a terribly predictable fashion. With directors Phil Lord and Chris Miller (Cloudy with a Chance of Meatballs), there’s a wacky sense of humour and energy brought to the direction but the script (credited to Michael Bacall) is bereft of invention.

Even though it reverses the roles of Tatum and Hill once they go undercover, the direction of the story never surprises (there’s some sort of comfort in that) and characters react to the big emotional beats in a manner that’s similar to every other comedy for the last fifteen years. You’re absolutely sure of the outcome and the film never once tries to dispel that.

It has moments that work really well, especially when Jenko and Schmidt try to gain some cred with their retro humour. The duo’s sense of humour and worth in the social strata of high school are totally upended on the first day. They’re out of their elements and part of the film’s charm is seeing how they adapt and struggle to their new lives. Both characters get to see the other side of school life that they weren’t privy to before and, as you do in school, learn something from the experience.

Tatum shows more of the comedic chops he displayed in The Dilemma; giving Jenko a dumb jock presence (his meltdown at a music recital is brilliant). Hill gets saddled with a role that inflates his character’s ego and as a result turns him into a dick. The script drives a wedge between Jenko and Schmidt that feels very contrived and unnecessary. The rest of the cast are good, special mentions should go to gym teacher Rob Riggle who knocks it out the park with his acerbic performance and Ice Cube as the belligerent Captain Dickson.

So while the gag rate is comfortably high, 21 Jump Street could have done with a better, less transparent story. Its off-kilter humour saves the day, giving the film a tone that’s not bound to realistic expectations. Surprises are few and far between but 21 Jump Street is just about crazy enough and endearing.

This site uses Akismet to reduce spam. Learn how your comment data is processed.